MAC DEMARCO has announced his return to Australia and New Zealand in January 2020 for HERE COMES MAC DEMARCO, a summer tour that brings the Mac spirit to audiences down under, on his biggest-ever headline run.

Mac has invited his friends, West Australian psych-rockers Pond and “Neo-Kawaii” bubblegum punks CHAI from Japan, to join him on this magical mystery journey down the East Coast. Pond and WA punk outfit Cold Meat will open the show in Perth and New Zealand singer-songwriter and multi-instrumentalist Fazerdaze, to join him on the Auckland instalment of his magical mystery journey.

West Australian psych-rockers Pond bring hype from sold out national headlines dates, and latest offering Tasmania (produced by the band and Kevin Parker of Tame Impala). Confronting personal and global dread with rich melodies, their signature trippy instrumentation will feature in all cities.

Japanese punks CHAI will join the tour in Sydney, Melbourne and Brisbane. The feminist quartet make their Australian debut in the wake of their critically adored album PUNK. Boasting highlight showcases at SXSW and The Great Escape, Pitchfork awarded PUNK Best New Music, saying CHAI is “a band that screams yes to joy”.

Female-fronted, self-described ‘snotty, snarky feminist punks’ COLD MEAT join the party in Perth, touted by Pitchfork as “responsible for some of the most exciting raw punk to come out of Australia”.

Mac DeMarco’s fourth album HERE COMES THE COWBOY was described as his “masterpiece” (Q magazine) on its release in May. The Canadian-born artist has always taken a more contemplative approach to songwriting, the new album framing these introspections in breezy grooves.

Known for his on-stage antics and rowdy performance persona, Mac last served his antics to sold out East Coast dates alongside his sets at Laneway Festival in 2018. Mac is back in 2020, with an unmissable lineup of exciting performers sure to delight. 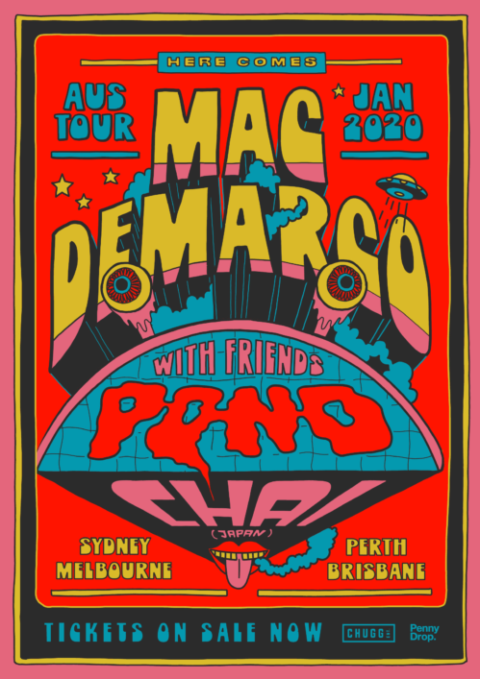